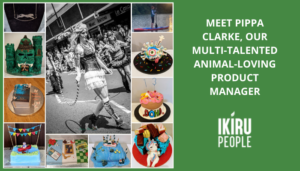 The origins: Pippa started her career after studying Maths, Computing and Physics A-levels with the intention of becoming a chartered accountant. She realised early on, however, that working in a small accounts practice wasn’t what she was cut out for. In the week of her AAT exams, she saw a job advert from a company that hired developers purely on aptitude tests and applied. They invited her to an interview, initially as a joke (they were brutally honestly about it!), because they saw modelling and pole-vaulting on her CV and thought they could have a giggle at her expense! To their surprise, Pippa achieved the highest result on the test and her journey into the world of software development began. In 2002, a friend recommended that she applied for a support team position at Voyager Software (currently Ikiru People). She started her role in development with their first back-office product, Contracts Manager. Two years later she designed and worked with the team to develop the product that we now know as Mid-Office – the software solution that takes the hassle out of recruitment agencies’ pay and bill processes. It’s changed a lot over the years, but Pippa still feels a virtually parental responsibility for it!

Even though Pippa is the Product Manager for Mid-Office, her role is very varied which allows her to continue to use this little bit of accounts training from her early career. As well as maintaining Mid-Office and working with the development team on enhancements and bespoke additions she also assists with everything from 3rd line support to demos where prospects have complex requirements or questions best answered by an expert.

THINGS YOU MAY NOT KNOW ABOUT PIPPA 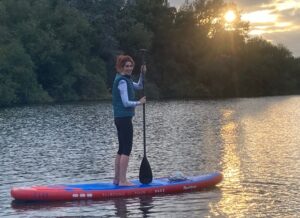 Pippa is super creative, can’t sit still and doesn’t watch television. She has a “She-shed” in the garden where, in her spare time, she makes jewellery and loves making celebration cakes for friends and family. She also hula hoops with the occasional performance at carnivals and more recently has discovered a passion for stand up paddleboarding.

Pippa’s favourite things include animals of any description. Apart from having an assortment of pets which includes three cats, the jewellery she makes is nearly all animal-inspired and she loves nothing more than watching wildlife when travelling.

This website uses cookies to improve your experience while you navigate through the website. Out of these cookies, the cookies that are categorized as necessary are stored on your browser as they are essential for the working of basic functionalities of the website. We also use third-party cookies that help us analyze and understand how you use this website. These cookies will be stored in your browser only with your consent. You also have the option to opt-out of these cookies. But opting out of some of these cookies may have an effect on your browsing experience.
Necessary Always Enabled
Necessary cookies are absolutely essential for the website to function properly. This category only includes cookies that ensures basic functionalities and security features of the website. These cookies do not store any personal information.
Non-necessary
Any cookies that may not be particularly necessary for the website to function and is used specifically to collect user personal data via analytics, ads, other embedded contents are termed as non-necessary cookies. It is mandatory to procure user consent prior to running these cookies on your website.
SAVE & ACCEPT