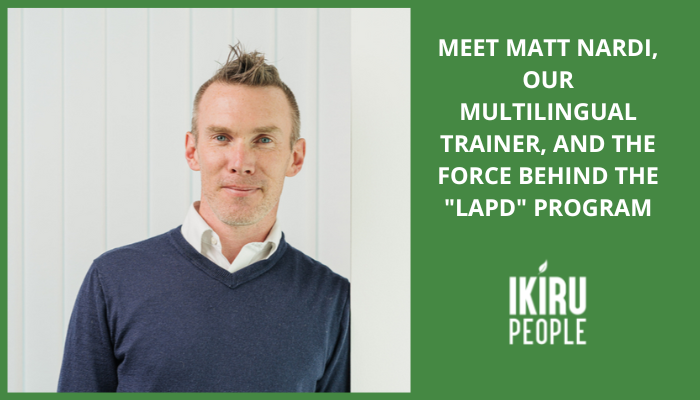 The origins: Matt studied International Business with Italian at Sheffield Hallam University and Universita degli studi di Bergamo in Italy. Upon graduation, he worked in Albenga, Italy on the Ligurian coast and then for a Paris Football Club in… Paris before coming back to London to work for a youth-centric football charity in London that focused on using football to help break down community tensions. These roles were the foundation that led him to the role he carries out at Ikiru People today.

Overall, Matt has been involved in training and mentoring roles for over 20 years including stints as an NVQ Assessor in the RAF, the British Museum, and St Thomas’ Hospital in London.

Since joining Ikiru People nine years ago as a trainer, Matt has also been an active member of the company’s Culture Committee as well as a creator and a manager of the LAPD program (more on this further down). In those nine years, he has helped hundreds of software users get up to speed with VDQ, Mid-Office, evolve, and Voyager Infinity.

THE IDEA BEHIND THE LAPD (LEARNING AND PROFESSIONAL DEVELOPMENT) PROGRAM

Learning is a lifelong process. Over time we acquire and master many skills without realising that there are people who may be interested in learning from us. This is how the LAPD program was born.

The whole ethos of LAPD is about creating an accessible internal 360-degree learning environment where employees can learn a new skill or share their expertise to upskill others in the organisation. This is also an opportunity for employees who often work remotely to get to know each other better through shared learning opportunities or interests.

Due to its popularity, the program has grown from a handful of workshops around customer service and team leading to an offering that includes sessions more directed towards gaps in people’s knowledge and skillsets. The project is continually evolving with many new ideas waiting in the wings such as the inclusion of non-work-related workshops.

LAPD also provides opportunities for staff to see how other colleagues and departments work as part of the overall service we provide. The aim of this is to improve teamwork cohesion and create discussion on how internal processes can be improved.

THINGS YOU MAY NOT KNOW ABOUT MATT:

Elizabeth Hurley’s mum, Angela, was Matt’s primary school teacher. He remembers her reading a letter from Liz to the class about her trip to Africa with a theatre troupe and the whole class being utterly bored. But that event is a story to tell the world!

He is also a culture vulture and loves immersing himself in local cultures. He has travelled to over 40 countries around the world, but Japan, Cambodia, Iceland, Morocco and Denmark left a lasting impressions on him.

Matt loves football and watches it all over the world. He once interrupted a Laos national team training session and asked if he could buy one of the shirts they were wearing. He and his family recently travelled the country to watch six (Women’s) Euros 2022 matches including the epic final and they also regularly watch Tottenham Hotspur Women play.

Matt is also currently studying a Level 5 Diploma in Education and Training.

Family, travelling with the family, travel photography, football, Khruangbin (a trio from Texas), and Studio Ghibli.

This website uses cookies to improve your experience while you navigate through the website. Out of these cookies, the cookies that are categorized as necessary are stored on your browser as they are essential for the working of basic functionalities of the website. We also use third-party cookies that help us analyze and understand how you use this website. These cookies will be stored in your browser only with your consent. You also have the option to opt-out of these cookies. But opting out of some of these cookies may have an effect on your browsing experience.
Necessary Always Enabled
Necessary cookies are absolutely essential for the website to function properly. This category only includes cookies that ensures basic functionalities and security features of the website. These cookies do not store any personal information.
Non-necessary
Any cookies that may not be particularly necessary for the website to function and is used specifically to collect user personal data via analytics, ads, other embedded contents are termed as non-necessary cookies. It is mandatory to procure user consent prior to running these cookies on your website.
SAVE & ACCEPT